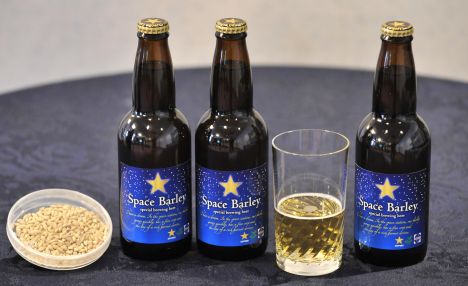 (Photo: Dailymail, uk)
Worlds 1st space beer brewed from barley grown on the International Space Station, has landed in Japan and are now gone on sale.
Japanese brewer Sapporo Breweries has made 250 bottles of the limited-edition Space Barley, which contains barley seeds that have been aboard the Russian craft on the International Space Station for almost half a year.
The beer is on sale for around 10,000 yen (RM378) for six bottles and according to a report on the BBC, tastes no different to normally brewed beer.
According to Sapporo Breweries company spokesperson Yuki Hattori, the firm had received orders from 2,000 people by Sunday (December 6th).
To make the beer, the brewery firm worked with biologists from a university in Japan who have been working with Russian scientists to try and grow edible produce in space.
This is to prepare for a future for humans to spend extended periods of time out of this world and to have a beer while space walking. This should be fun.
Video on Space Barley