Microsoft has suspended MSN Juku, its new microblogging service in China, for allegations that the code was stolen from a Canadian startup, called Plurk.
Many of you might have heard of Plurk a microblogging site although it’s not so famous compare to Twitter. The difference is Plurk is a micro-messaging site where each message appears on a timeline.

The top five countries where Plurk’s traffic comes from, according to Google Trends for Websites, are  Taiwan, Indonesia, the Philippines, the U.S., and Malaysia.
Recently in April this year, Plurk was blocked in China. And according to Plurk’s lead developer, Amir Salihefendic, “We at Plurk still don’t know why we are banned and we did not get any warnings from the Chinese government or have been in contact with them.”But they did a test online and found out Plurk is not available in China.
You will notice from the table Plurk’s ranking in China had fallen to 9 placed.
Below are test online results of inavailability of Plurk in China.

And now, with the launched of MSN Juku in China by the local Microsoft subsidiary, in a country where Plurk has been blocked since April this year is getting much attention because of it’s look-alike.
The design of MSN Juku has the same looks as Plurk. 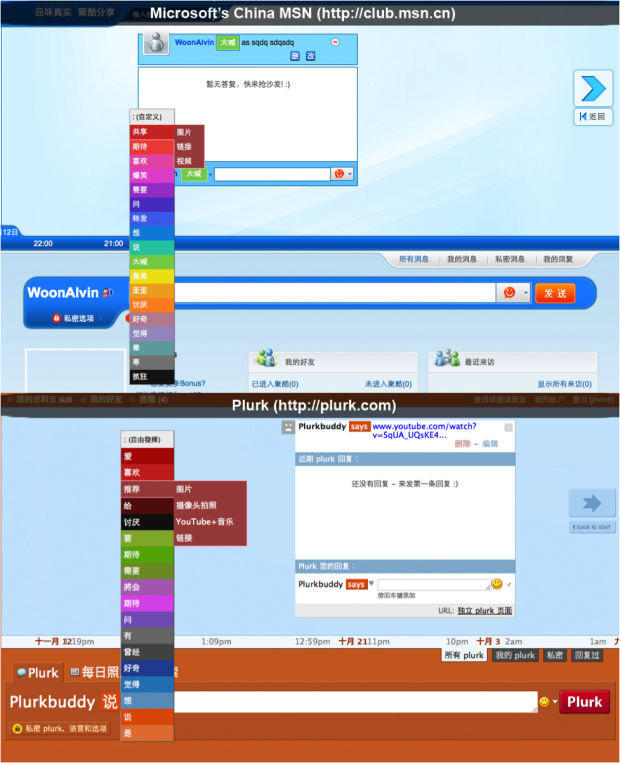 (Img credit: Techcrunch)
What plurk’s blog have to say about this imitation?
Imitation may be the sincerest form of flattery, but blatant theft of code, design, and UI elements is just not cool, especially when the infringing party is the biggest software company in the world. Yes, we’re talking about Microsoft. Blerg.
Here’s the short of what we think has happened:

The vendor has now acknowledged that a portion of the code they provided was indeed copied.

And microsoft said MSN Juku was developed by 3rd party contractors.
The only thing Plurk wants is to see,  MSN Juku to be taken down and Plurk  doesn”t want to be tangle into any legal dispute with the world largest software company.