The next season of Formula 1 racing is going to be  a very exciting event. Air Asia boss Tony Fernandez have taken up Sir Richard Branson’s challenge – whoever loses will dress as an airline stewardess on the winner’s airline.
Fernandez, the owner of Lotus F1 racing team while Branson Virgin Group owns virgin racing. Both are among the 4 teams competing in the 2010 F1 circuit. 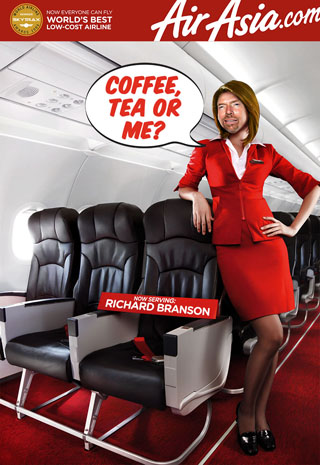 An AirAsia statement said Fernandes has even taken the liberty to pick out a lovely crew uniform for Branson.

“It’s quite fitting, don’t you think? Our guests will be delighted to be served by a Knight of the Realm. But knowing Richard, the real challenge will be to prevent him from asking our guests “coffee, tea or me?,” said Fernandes.

He said Branson would be assigned to duty on board a flight operated by AirAsia X, the long-haul, low-cost affiliate of AirAsia. “We’d like to keep him with us for a longer flight rather than the short-haul flights operated by AirAsia. We’ll be applying soon to the Department of Civil Aviation to gain clearance for him.”
Fernandes, who once worked for Branson as a financial controller at Virgin Records, had recently joked his only target in the new F1 season is to beat Branson otherwise he would retire and kill himself.
The statement said Branson however suggested something less macabre. “I like Tony a lot and I really hope he doesn’t have to kill himself, but at the same time I’d obviously like to beat him. So maybe we should think of another challenge.
“He has an airline, we have an airline, and if we beat him he can come and work on one of our airlines as a Virgin stewardess. It will save him having to kill himself, but we’ll make sure the stewardess outfit is perfect,” joked Branson.
“I suspect if he beats us he might ask me to reciprocate. Maybe I’ll have to check out how fetching his stewardess outfits are,” he added.
Reference: thesundaily