The legendary group Earth, Wind And Fire will be performing live for their Malaysian fans at Sunway Lagoon Surf on Thursday, December 3, 8pm.
Formed in 1969, Earth, Wind and Fire have had over 90 million albums sold worldwide, and had been nominated for twenty Grammy Awards, having won six as a group. They have also been inducted into the prestigious Rock and Roll Hall of Fame and the Vocal Group Hall of Fame.
Earth, Wind and Fire, with original line ups featuring Philip Bailey, Verdine White and Ralph Johnson, will thrill the Malaysian audiences with their rendition of a rich and lively mix of African, Latin American, Funk, Soul, Pop, Rock, Jazz and an assortment of other genres. Not forgetting of course some of the group’s most popular hits from their 23 albums, such as Keep Your Head To The Sky, Love’s Holiday, Common Children, Evil, Shining Star and That’s the Way of The World among others.
Tickets to the concert priced at RM888, RM688, RM388 and RM158 can be bought from Axcess Tickets (03 7711 5000/www.axcess.com.my).
Click here for map 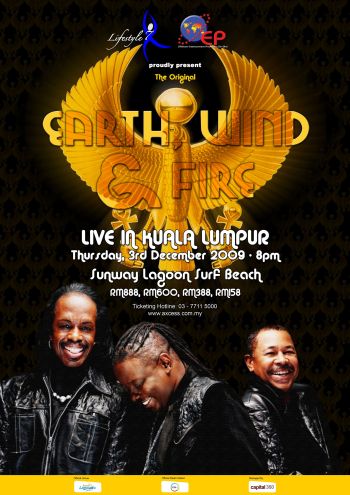