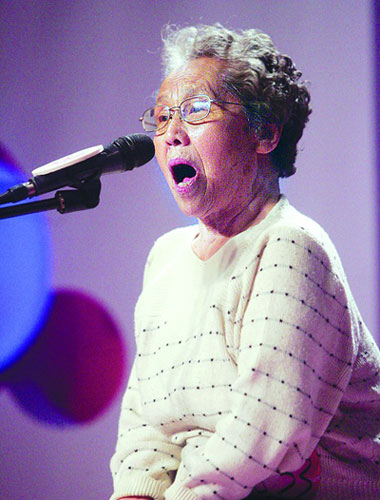 Wu Baiwei, 79, competes at the “Happy Girl” singing competition. [Photo: hsw.cn]
She is at least three times older than many of her competitors.
She was not even sure what she was competing for when she first stepped onto the stage.
But once she opened her mouth, judges and audiences were blown away.
Meet 79-year-old Wu Baiwei, the oldest contender yet for China’s “Happy Girl” singing competition.
“I was on the street and saw many girls signing up for some kind of singing contest. I asked them if an old woman like me could take part and they said ‘yes’,” Wu said.
It was only later that Wu, a retired teacher in Xi’an, capital of Shaanxi Province, found out she had entered a TV singing contest organized by Hunan TV station.
It was heartening to know that the organizers allowed a senior like herself to take part in such a contest aimed at young girls, Wu said.
Still, Wu said she did get some special treatment because of her age – she was whisked past the long lines onto the stage, the moment she arrived at the first few rounds of the competition on Monday.
Impressed by Wu’s can-do spirit and singing prowess, all three judges that day reportedly agreed to send Wu to the next round.
Picked from 600 initial competitors, Wu is now one of the top 50 contenders for the final contest slated for July.
She is also being compared with 48-year-old Scottish singing sensation Susan Boyle, who went from obscurity to stardom in the British TV talent show “Britain’s Got Talent”.
“I was so moved by this old woman who was courageous and confident enough to take part I hope old people are living as happily as she is,” said Wu Zhoutong, one of the judges.
Indeed, Wu Baiwei, who taught Chinese at Xi’an Normal University and still gave lectures in two universities after her retirement in 1987, believes happiness is all about “working hard when one is working, and enjoying life when one is retired.”
“It’s about eating when you want to eat, singing when you want to sing, and playing when you want to play,” Wu said to the judges.
Wu said she has had her fair share of sad experiences, especially after losing her husband and daughter.
“But I think people should live with a smile. Sometimes when I have to face difficulties, I encourage myself by singing songs,” she said.
“We are very moved by participants such as Wu,” said Cao Chunli, director of the contest’s Xi’an area.
“In our view, no matter how old a woman is, she is a girl,” Cao said.
“We do not know if Wu can advance in the competition and we should consider her health as the later rounds will get more intense,” the director said.
“It does not matter whether I can go to the next round or not, I have experienced the happiness of singing on stage,” Wu said.
By Ma Lie