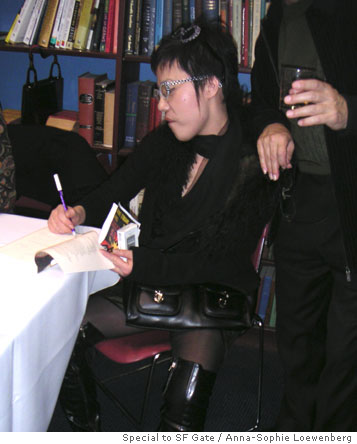 “Why can’t you smoke anywhere in this f**ing America?” the 33-year-old author of the best-selling novel “Candy” exclaimed before speeding out the door for a prereading cigarette.(2004)

Mian Mian is an Author and actress from Shanghai.
Her book Candy was banned in China and subsequently the government banned her next book Panda Sex.

Beijing’s well known author Mian Mian (the 1st chinese author who accuses Google for copyright), gained popularity from tales of sex, drugs and alcohol in the underworld will sue Google for copyright infringement. The lawsuit against Google in China for scanning the entire book of Mian Mian’s 3rd novel “Acid Lovers” into Google’s digital library, although Google had it removed from their website on Nov 5 prior to this issue.But she said a Google key-word search still brings up passages of her book.

Mian Mian, 39 year old (an ex-drug addict turned dance party producer), whose fame in 2000 with her novel “Candy” is seeking 61,000 yuan (8,900 dollars) in damages for her “economic and mental compensation”. In addition, she ask Google to delete all texts about her book and make a public apology to her. Mian Mian’s books are translated into many languages and are widely banned in China, though they are still available in the black market for her “Candy” novel. In 2000, her novel “Candy”, a novel based on her own life as a teenage drug addict on the streets of Shenzhen and Shanghai was banned. It was also her first work of fiction to expose China’s underground of drugs, promiscuity and rock music.

Mian was 24 and just out of rehab when she began writing “Candy” in the mid 90s, she had then gained international reputation in International Herald Tribune and was label “China’s most promising young writer”. She had quit popping pills and has had a child of her own.

China Written Works Copyright Society, which protect Chinese writers’ copyrights, claimed Google scanned 18,000 books by 570 Chinese writers without authorization, which is available only to internet users in the US.

An interview with Mian Mian back in 2004 by Anna-Sophie Loewenberg, special to SF Gate

What inspired you to write “Candy”?

I started to write this book 10 years ago. At that time, I was really hopeless. I didn’t know what I should do. I was just out of my drug problem, so I rented videos. Most of the movies were from America, Hollywood movies. So I said, “OK, I can write a story.”

How long did it take to write the book? What was your writing process like?

I spent five years writing this book. The first two years, I stayed with my parents, because my parents just think, “OK, you can write. You don’t need to work.” So I was really lucky that they supported me, even though I’m a trouble girl. They never expected that I can be famous like [I am] today.

So, the last three years, I lived in the countryside on my own, far away from downtown, about an hour-and-a-half drive. The area was empty, and it was only me living there. So I wrote every night and every morning. At 4 am, I felt a lot of strange energy [coming] from out of my window — it [came] to me.

Have you always been a writer?

It was when I was 17 that I had first started to write. I thought, “This is the only thing I can pick up. I can do it by myself. I don’t need anyone to help me.”

Why do you think people in America will want to read “Candy”?

The story is quite normal. I think that every country has this kind of book in their history. In America, maybe it was in the 1960s. In China, it happened really late, in 2000.

“Candy” was the first novel in China that exposed the underworld of sex, drugs and relationships from a female perspective. Were you writing this book for other women?

When I wrote this book, I never thought about who I was writing it for, because I was just writing for myself. But I never imagined that so many young women would like my book. Even for foreign women who read my book, it’s not just because I’m writing about China, but it’s because I’m writing about so many things that are inside of our hearts, interesting stuff. It’s teenage stuff. A lot of women have written me letters.

The Chinese government banned Candy in 2000, and that helped make it an underground best-seller. Did they ban the book because you were a woman writing so candidly about sex?

I don’t think it had to do with the fact that I’m a woman. I think it was because the book became so popular that all of the newspapers started writing about sex and drugs. These topics hadn’t been exposed this much before, so the government had to put a stop to that. But the government couldn’t make the media stop talking about the book, so they banned the book.

This is your first time in America. How do you like it so far?

I don’t really understand America, because it is huge, and I’m too busy promoting my book to really hang out and party. But I think America is really fun, and it has a youthful feeling. Europe has an older feeling, so it’s not as fun as America.

How did you find your English translator, Andrea Lingenfelter, and what do you think of the translation?

She found me. I think that my translator really did a great job. Because sometimes, if I’m drunk, or I want to go to sleep, I pick up the book and read, because [English] is the only language I can read in translation. I can’t read German, Italian or French. So, if I don’t want to read a serious work, sometimes I pick up this book. And, almost every time, I want to cry. I think the language is really beautiful.

What most inspired you when you were writing “Candy”?

Definitely music. There are so many bands that I like. The Doors is the band that has most inspired my writing, because of the feeling of their music. Also, P.J. Harvey inspires me. As for Chinese musicians, it would have to be Cui Jian. I like Wang Shuo’s books in Chinese, but I wasn’t reading many books.

You started writing “Candy” when you were 24 years old. Since then, you have had a child. How have you changed?

Also, I broke up with my baby’s father, and he took the baby, so our battle over the baby has really changed me.

Do you ever see your daughter?

I often go to Beijing to see them.

How has the Shanghai music scene you wrote about changed?

I think the change is that DJ parties have become more popular — more people know about the dance scene — so the police come and drug bust the parties. It’s not like it used to be, very underground. If you carried pills, nobody knew you had them, and if you took pills, there wasn’t any problem. Now, the police are really busting
people.

But I think the fact that young people are going to clubs, and just enjoying themselves, is a huge improvement for China.

Now, you promote your own parties. Is it true that you actually threw a rave on the Great Wall of China?

We threw an insane party on the Great Wall. That was last year, during SARS, in April. So it was really scary. The first night, we threw a party in downtown Beijing, 1,500 people dancing with face masks on — really scary. The next day, we put on our face masks, with the No. 1 DJ in the world, Paul Oakenfold, and we went climbing up the Great Wall. Wow! That was the best party ever, because this British DJ, Paul Oakenfold, was the only one who didn’t delay his trip. Nobody was willing to come to China during that time. Only insane people would come to China to party. Shanghai and Beijing were completely empty, but he came.

Also, every time I throw a party, it rains. That night, there were five hours of rain. We danced in the rain for hours. So, everyone at that party was a lunatic. It was incredibly cold. My expensive jacket and bag and boots were all ruined. I think that vodka really works. I think it was the best party I’ve ever promoted in my life.

How can you throw a party like this in China? Weren’t you afraid that the government was going to shut you down?

It wasn’t illegal. We were working with the local government. But it’s really hard to throw parties in China, because, if you want to be the queen of the party scene, you have to make peace everywhere. It’s not like you, in America, might imagine: This week, a party; next week, a party. It takes a lot of planning. Even for a small party, you need a lot of legal papers. You need a sponsor, and a working visa for the foreign DJ. Everyone thinks that I make a lot of money from throwing parties, but it has become really hard to make money. It’s a lot easier for me to make money with my writing.

How about your new book, “Panda Sex”?

I worked three years on my new book, which will be published in March. My new book also talks about love, but it’s not like a teenager — it’s more mature. So, now, I’ve already grown up from [“Candy”].

You focus on sexuality and relationships in your novels. What kind of men are you attracted to?

Are you working on your next novel?

It took me three years to write “Panda Sex.” From now on, I don’t need to spend three years writing a book. Now, I can put out a book every month. I’m still a writer, I can still write a book, but now I’m recording everything, and someone will help me type the recordings, and then I’ll put it together, and I’ll write my name. This is my book. I think it’s more interesting. [It’s] better just [to] do it in one or two years. I think it should be a little easier. I don’t have to be so tired. Three years writing one book, that’s f**ed up — that’s exhausting! So, I’m going to try it this way. I think people will love to read this. The lower you write, the more people love to read it. Our conversations, driving, stopping — I’ll record everything. People are really going to like it.