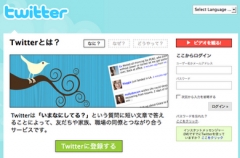 TOKYO – Twitter Japan has further moved to differentiate itself from its global counterpart through the introduction of a tiered payment model that will charge audiences to view tweets from premium Twitter accounts.
Speaking at the Mobidec2009 conference earlier this week, Kenichi Sugi, COO of DG Mobile – a subsidiary of Japanese Twitter partner Digital Garage – announced that Twitter would introduce paid subscription options starting in January that will allow account holders to charge audiences who want to look at their tweets and access links to their external websites.
According to local reports, the plan will allow audiences to view some text on all tweets but will charge a fee to unlock access to certain images, external URLs and text. Users willing to pay to view the tweets can do so via a monthly subscription model, for which they can use a credit card to pay. They can otherwise buy a prepaid ticket with a credit card or at a convenience store. Finally, audiences can choose a pay-per-tweet option, which is charged to credit card, convenience store top-up cards or carrier billing for Twitter-on-mobile users.
Reports note that the model is ideal for account holders who deliver real-time information; news and educational content; and include original photographs, video images and audio.
According to the reports, the amount charged to each user will vary according to the charging account holders and is likely to range from JPY100 to JPY1000 (US$1.16 to $11.60). Twitter will take 30 per cent cut of the transaction fees.
The news comes as Twitter Japan recently distanced itself from its parent through the introduction of products such as a video-sharing service for users exclusively in the market. TwitVideo was developed by DG Mobile and exemplifies how Twitter.jp is a platform for experimentation.
According to reports, Japan is currently the only country in which Twitter has shown signs of profitability, supported by advertising with rates ranging from $5,500 to $33,000 for a customised page and banner.
Kei Shimada, founder and CEO of Japanese mobile research, consulting and development firm Infinita Inc, said that a similar payment model wouldn’t necessarily work for Twitter in most global markets, but in Japan, Twitter has real potential to sustain the system.
Shimada notes that, although Twitter.jp only launched its official mobile site last month, it’s likely that most of its traffic will come through mobile in the future. He points out that Mixi, the most popular social networking site in the country, receives approximately 70 per cent of its traffic through account holders on mobile.
“In terms of Twitter, the model itself is perfectly legititmate in that Japanese people always considered mobile content as something they would pay for. It’s been recognised that mobile initiatives would be paid for through mobile billings, so this is nothing strange,” he said, adding that Twitter Japan has the ability to be more experimental because of its Twitter affiliation with an external operator, Digital Garage.
The news comes as Twitter’s founder Biz Stone recently raised the possibility of an IPO for the company, telling Western media that he would do whatever necessary to avoid being acquired. “The point is, we want to build our own company that will last for a long time. If an IPO’s the way to do that, then sure,” Stone told media.
Other companies have also tried to capitalise on Twitter’s success. Earlier this month, Chinese search engine Baidu quietly launched its own Twitter-like product called iBBS, which looks to compete with portal Sina.com’s Wei Bo service, both of which have grown in popularity due to mainlanders’ inability to access Twitter in the country.
Source: www.media.asia