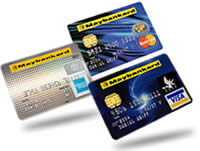 Maybank had make an announcement to all Maybankcard holder and American Express cardmembers in view of the recent announcement in Budget 2010 to impose RM50 on each principal card and RM25 on each supplementary card not to take any action now. This is because they are obtaining further guidelines from the authorities on this matter. As the annual service tax is only effective 1 January 2010, it is best that card holder to retain their card to enjoy the many Card privileges. Maybank will advise card holders accordingly upon receipt of further direction on this.
In the meantime, Maybank urge card holders to continue to enjoy the many Treats and Membership Reward privileges of being a Maybankard and American Express Cardmembers :