SHAH ALAM: Three men were granted a discharge not amounting to acquittal by the High Court yesterday on drug trafficking and possession charges.
Judge Datuk Mohtarudin Baki granted the discharge after deputy public prosecutor Rosida Abu Bakar failed to produce the investigating officer, Inspector Chong Voon Loong, for the hearing.
She was also unable to produce the case exhibits as they were with Chong who was on leave until the end of the week.
Forklift driver Hok Kien How, 22, unemployed Wong Wei Leong, 32, and mosaic layer Lee Ah Tiew, 48, were charged with trafficking in 370.5g of Ecstasy pills near the Genting Skyway cable car station in Gohtong Jaya, Hulu Selangor on Aug 14, 2007.
Lee was also charged with possessing 19.78g of the same drug at Aman Dua Apartment, Jalan Aman, Desa Aman Puri in Kepong on the same day 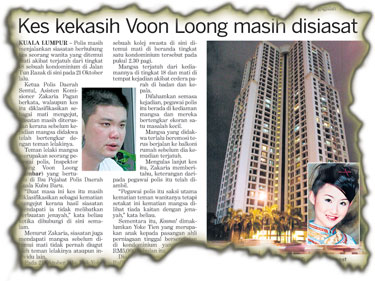 Cop under probe over woman’s death
KUALA LUMPUR: A police inspector is being investigated in connection with the death of a woman who fell from a condominium in Jalan Tun Razak.
Sentul police chief ACP Zakaria Pagan said the police inspector and woman were believed to have a misunderstanding before the incident.
Kok Yoke Tien, 22, who was found dead on level one of Kondominium Vista Damai at 2.30am yesterday, is believed to have fallen from her apartment on level 18.
“Police had received a phone call from a security guard that a woman was found dead on the balcony of level one of the condominium.
“She died from multiple body injuries. Initial investigation found no criminal elements and that the woman could have jumped from the building,” he said. Zakaria said the inspector from Selangor, in his 20s, was in the woman’s apartment at the time of the incident.
The inspector was not detained. — Bernama
Source: TheStar