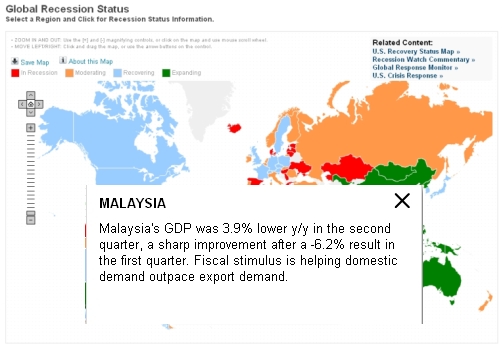 Global recession may last until end 2010, says Roubini….
Nouriel Roubini, a professor at the Stern Business School at New York University and chairman of Roubini Global Economics (RGE),  predicted the current financial crisis two years ago, said the global recession will last all of this year and probably next.
He added the recession will continue through 2010 in advanced economies while job losses will persist for an additional year.
He said world governments are falling behind the curve in tackling the crisis with “policymakers moving in the right direction — but (doing) too little too late.”, Roubini warned that the United States, Europe and Japan must “get their act together” to avoid the global economy sinking further.
“People were hoping it would be a V-shaped recession — a sharp fall, followed by an equally quick recovery,” he said.
“But we are in the middle of an ugly U-shaped recession.”
Roubini said the bottom of the ‘U’ — the length of time the world economy will continue to contract — would last a minimum of three years starting from December 2007.
But he said there was a “one-in-three chance” that recession would turn into an ‘L’ — a prolonged period of stagnation or shrinking output, coupled with falling prices as demand dries up.
The situation can be improved by appropriate policies, including governments taking over insolvent banks, cleaning them up and re-selling them to private investors, he said. The Group of Seven and the Group of Twenty economies “must act together to get out of this mess,” Roubini said.
Roubini said the global economy may shrink 1% or grow 0.5% in 2009, before recovering to about a 1% growth in 2010, effectively extending the recession until the end of next year.
Emerging market economies, including China and India, will slow down sharply, he said, adding that “we are already seeing the beginnings of a hard landing.”
“People say when the US sneezes, the rest of the world catches cold. In this case, the US is just not sneezing, it has a severe case of chronic pneumonia.”
“We all sink or swim together,” he said, adding there is no way policy action in emerging economic giants India and China can pull the global economy out of the slump.
China’s economy may grow 5% “at best” in 2009 after expanding at an average 10% pace each year in the past decade, Roubini said, rejecting the theory that emerging markets are decoupled from the problems in industrialized countries.