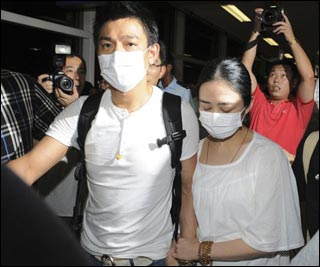 Ever since their secret marriage was exposed in August, Hong Kong superstar Andy Lau’s wife, Carol Chu, has been laying low in a bid to stay out of the media glare.
Andy lau and Chu had come to an agreement that Chu should refrain from going out and let the maid take care of all the errands.
When a Hong Kong tabloid published details of the couple’s 2008 wedding in Clark County, Nevada, Lau’s career took a big hit as fans criticised him for his lack of honesty. The actor-singer had repeatedly denied being romantically linked to Chu.
According to insiders, Lau hopes that by keeping Chu out of the limelight, it will take the media attention away from their marriage.
However two weeks ago, in a rare occasion, the Heavenly King took his wife on a movie date to catch the Michael Jackson film “This Is It”. The couple were accompanied by Lau’s parents as well as ten members of his staff and assistants.
According to reports, Lau booked the entire cinema, which is known for its posh settings, for about HK$5,000 (S$900). A signboard indicating that there was a private event was displayed outside the cinema, while cinema staff kept watch outside.
However, the press soon got wind of the private screening and gathered outside the cinema. To avoid the paparazzi, the couple later left by the back door which led to the car park