Oasis of the Seas features 2,700 cabins, can accommodate 6,300 passengers 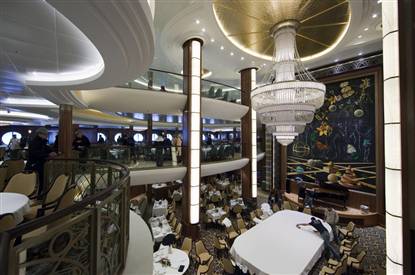 Interior view of the world’s biggest cruise vessel, Oasis of the Seas, built by STX Europe’s shipyard in Turku, Finland.
HELSINKI – The world’s largest cruise liner began its maiden voyage on Friday, gliding out from a shipyard in Finland and heading to Florida, with an amphitheater, basketball courts and an ice rink on board.
The 16-deck Oasis of the Seas spans 1,200 feet (360 meters) from bow to stern. Its 2,700 cabins can accommodate 6,300 passengers and 2,100 crew.
Commissioned by Royal Caribbean International, the ship cost $1.5 billion and took two and a half years to build at the STX Finland Oy shipyard in Turku, southwestern Finland.
The liner has four swimming pools, volleyball and basketball courts, and a youth zone with theme parks and nurseries for children. There is also an ice rink that seats 780 spectators and a small-scale golf course.
It features various “neighborhoods” — parks, squares and arenas with special themes. One of them will be a tropical environment, including palm trees and vines among the total 12,000 plants on board. They will be planted after the ship arrives in Fort Lauderdale.
In the stern, a 750-seat outdoor theater — modeled on an ancient Greek amphitheater — doubles as a swimming pool by day and an ocean front theater by night. The pool has a diving tower with spring boards and two 33-feet (10-meter) high dive platforms. An indoor theater seats 1,300 guests.
More photos
Source: www.msnbc.msn.com