A U.S. court has ordered a Las Vegas man to pay Facebook $711 million US in damages for spreading spam messages on the social networking site.
Sanford Wallace accessed Facebook members’ accounts without their permission, and sent out fake messages and wall postings, the company said on its website on Friday.
“We won another battle in the fight against spam,” the company said in a statement.
Wallace was successfully sued last year, also for spreading spam, by MySpace, which won a $230-million judgment. He was also fined $4 million in 2006 by the U.S. Federal Trade Commission for spreading pop-up ads online.
Facebook said it doesn’t expect to get any money out of Wallace, who is bankrupt, but added that he could face jail time.
“Most notably, the judge referred Wallace to the U.S. Attorney’s Office with a request that Wallace be prosecuted for criminal contempt, which means that in addition to the judgment, he now faces possible jail time,” the company said in its statement. “We will continue to pursue damages against other spammers.”
Source 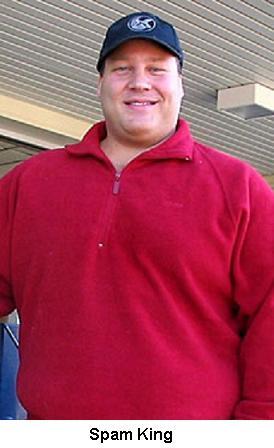 This is not the first time…
Wallace used “phishing” techniques to gain unauthorized access to users’ accounts, and then send fake wall posts and messages. He filed for bankruptcy this summer.
This is not the first time Wallace has been found liable for malicious marketing practices on social networks. In May of 2008, MySpace won a $234 million judgment against Wallace and business partner Walter Rines for illegal spam and phishing attacks against MySpace users. Wallace has been actively building his “Spam King” reputation since 1997, having been charged with various federal crimes over the last decade.
Source