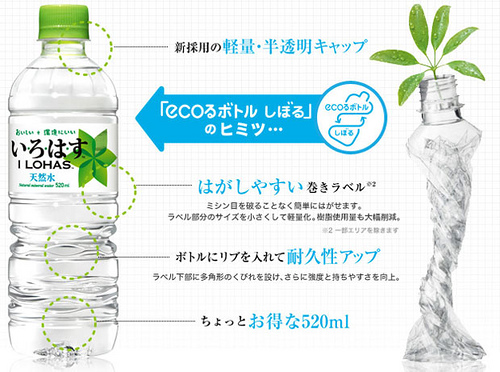 Millions people are creating trash everyday. I Lohas a trendy mineral water brand in Japan created by Coca-cola Japan has come up with the idea of reducing waste through this special mineral bottle.LOHAS which stands for Lifestyle of Health and Sustainability of market segment.
This bottle comes in a newly developed “eco” 520ml PET bottle that reduces waste. The new type of bottle weighs only 12 grams when empty which is 40% less than Cola-cola PET bottles.
After having drunk the empty bottle, it can be twisted off in order to take less space in a waste bin. By doing so, it actually decreases the volume of plastic waste.
This marketing campaign by TV ad commercial featuring Japanese good looking and macho actor Hiroshi Abe encouraging consumers to follow him in the 1-2-3 steps marketing campaign 1. buy, 2.drink and 3. discard.
Coke’s I LOHAS bottle benefits are to minimization of plastic and easy-crush design has a number of benefits too: lighter in delivery loads, recycling shipments with lesser wasted air, and a smaller number of waste disposal emissions.
Coca-Cola Japan I LOHAS – ‘Open, Drink, Twist’featuring Hiroshi Abe