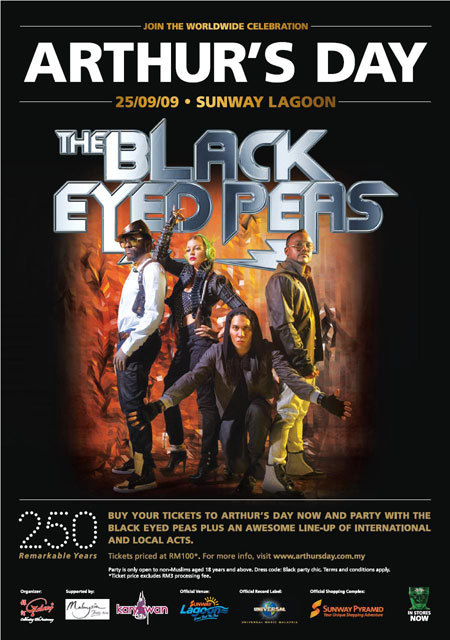 The Arthur’s Day celebration as part of one of only 5 global venues to host this once-in-a-lifetime event, the Grammy Award winning and multi-platinum artist, the Black Eyed Peas, will be performing at Sunway Lagoon on 25 September and its now open to Muslim according to ChannelNewsAsia , because the sponsor sells alcoholic beverages. According to the Associated Press, an official at the Ministry Of Information, Communication and Culture said “Muslims cannot attend.”
The Malaysian Arthur’s Day celebration will also feature performances from the likes of MC HotDog from Taiwan, Reshmonu, Danny One and Man Hand. The Arthur’s Fund in Malaysia will also be unveiled at the event. The fund, a global programme starting off with six million Euros, will be used to enable and empower individuals with the skills and opportunities to deliver a measured benefit to their local community
Arthur’s Day marks the 250th anniversary of the signing of a lease on the St James’s Gate in Dublin, Ireland in 1759. This global celebration will feature a series of events that will take place in cities like Dublin, New York, Yaounde and Lagos, with live performances by a star-studded line-up that includes Estelle, Kasabian, Tom Jones, Sugababes and Razorlight.
Join the worldwide celebration of Arthur’s Day as we party across the globe over 36 hours. Kicking off in Dublin, New York, Lagos and to over 150 countries, Arthur’s Day culminates in Kuala Lumpur on 25 September 2009! Party with the Grammy award-winnng hip hop foursome; the Black Eyed Peas and an awesome line-up of international and local acts. Get your tickets now!
Tickets may be obtained from Galaxy Mid Valley office / Sg. Wang Galaxy ticket counter / Sunway Lagoon ticket counter & all Axcess outlets.
For more info, visit www.arthursday.com.my
Kenny sia our famous Malaysia Blogger will interview them.