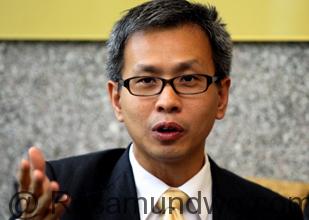 What attract me to buy Personal Money Magazine August 2009 is “Tony Pua’s article on his success stories”.
It was a story of 37 year old, Tony Pua’s, MP for Petaling Jaya Utara childhood dreams to reach financial success, taking risks in his startup business and how he become an MP.
He was the eldest son of the poultry farmers from Batu Pahat, Johor. His dream is to startup his own business and become financially independent when he turns 30 years old.
He worked for Anderson Consulting (known as Accenture Consulting) for a year after he graduated with a degree in Philopsophy, politics and economics from Oxford University. After one year of working with Anderson, he was told that he couldn’t become a partner even after 5 years with them although he performed well and fast learner in his position.
He noticed this by looking from his collegues in Anderson;

“The higher you climb up the corporate ladder, the harder you have to work”

What he wanted is to climb up the ladder and work lesser!.
He was not afraid and hesitate to startup a company, it was a natural thing for him. He said worse come to worse, he could get a job to pay back the debts if his company fails.
In Mac 1997, he start up Cyber Village (web based applications consulting company) together with his 3 friends with a combined capital of RM50k. He faced setback when Thai Baht crashed 3 months’ later, his co grew to average market capitalisation of s$10mil it hits S$20 mil. In 2001, his co is listed on Singapore Stock Exchange and he was only 29 (the youngest CEO/Founder).In Sept 2001, stock market crash, dot.com bust. Some clients defaulted on their debts to Cyber Village. He said it was a case of managing cash flow and learning lessons, like going into deals you shouldn’t have, and being cheated by people despite having the best lawyers advising you.
At peak of crisis, his personal debt is from RM3 mil to Rm4 mil. At that time, he was ask to join DAP and became a member a year later in late 2006 (stabilising his co and selling is off with a attractive sum).
He was already doing work on policy papers, briefing on economics and IT for DAP. In Jan 2007, he was the economic adviser. The Rocket (main party news) was put under Tony Pua’s wing. He also play the role of party leader’s role, cover policies for party, party organisation, recruitment of new leaders and help with state govt.
Tony Pua’s definition of success

“Reaching a point where you can do whatever you want to do, whether it money making or not, without worrying about financial commitments if things don’t work out”

His modest ambition is as long as he pay off his double storey link house in a fairly decent area, tha’s sufficient for him.
Tony’s Pua’s philosophy of money
“It’s not a case of how much I want but how much I need”
People told him that he could have grow his business further and made more money in 5 years time. People always want to make more money but as he said, you just have to take a step back and ask yourself how much you intended to make in the first place.
He asked himself “With this price, have I achieved what I intended when i started the company?”, It is good (the amount) good enough to send his children to uni, assuming the kid not smart enough to get a scholarship?
Taking risk

“Different stages of lives , people need to adopt different levels of risk, depending on what you intend to do”

When he start his co, the level of risk had to be high (at his age).
Other tend to overly risk taker from start to finish.

Many people said get more experience first. But the way life works is “The more you save, the more experience you get,  your level of risk taking will declines even further because now you bigger houses with bigger mortgages, bigger cars with bigger loan instalments, you get married and have all the commitments that come with marriage and you have children that you need to worry about.

By the time one make a lot of money from their salary, you’re not going to give up on that salary anymore.
Say for he said “If I were 30, still working in Accenture, getting Rm30k a month, do I really want to give up on that salary and take up about Rm2k a month for a start? I think the period of take risks is in the first 5 years of one’s working life – it doesn’t have to be immediately, experience is still required – so there still needs to be a balance.
He also added, “But once you reach a stage like mine where you have some money, but not an excessive amount, then you need to become a prudent investor, because I don’t have other back-ups and I need to think of my children. You don’t chase after the market just because you think there is a potential 10% upside, but a 20% downside. You put it in some fixed deposit savings. Instead, you invest heavily in the markets when there is 40% upside. You need to adapt.
His investment capital was Rm20k, but the returns percentage wise was phenomenal and can’t only do that by starting you own business.
Politician vs Entrepreneur
Politician – no financial pressure, have assistance behind him, no need to worry staff their jobs
Entrepreneur – Worry about where money comes from every month for your hundred staff
Similarities in both is “Selling”
As politician – sell different product
As entrepreneur – sell to client, convince them that you’re the right company.
He don’t like selling, he hate most, but as he said ” you have to make yourself do it and you learn along the way”. He’s an introvert but he had to get out of his natural comfort zone.
He advise ppl to avoid debt although it’s necessary for you to start a business. For eg, if you have Rm1 million and you take on Rm50k in debt, then it’s okay.
Balancing life and work
Whether he runs a co / politician, he is able to balance his life between life and work. He can work from home, in coffee shop with his children, check mail at playground. His wife open a law firm and it just next to his office. Their children either follow his wife / him if they don’t have any domestic helpers around. When he’s busy at night / weekend, he will schedule weekday afternoons with his family instead.
His future plans and retirement
He said he won’t be starting another company, he’s glad the job allows him flexibility.
Tony Pua’s Blog