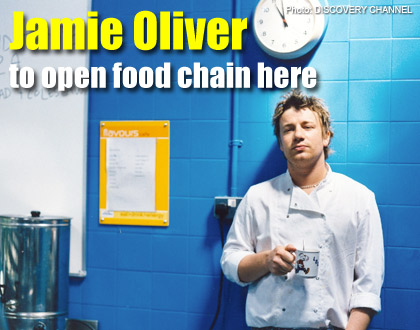 HONG KONG — Celebrity chef Jamie Oliver is planning to launch 30 Italian family-style restaurants in Asia, with the first one set to open its doors to his gastronomic followers in Hong Kong early next year.
The move marks the first step in taking his chain Jamie’s Italian — which now has five eateries in England — outside his hometown, to a region which takes pride in its rich diversity of international cuisine and where the economy is picking up faster than anywhere else in the world.
“Why Asia? Of all the markets, it has by far the fastest-growing economy,” said Edward Pinshow, president of Tranic Franchising, which formed a venture with Jamie’s Italian International for the Asia expansion.
“The Chinese have become extremely fond of Italian food. In Japan, Jamie’s become a household name,” he said Tuesday.
Pinshow told AFP that they are now raising funds for the expansion, which will start with the opening of six restaurants in Hong Kong and Singapore.
They plan to roll out another 24 eateries in other parts of the region over the next five years, with China, Japan, Taiwan and Korea among the most likely candidates for location.
Pinshow said they are now working hard to get their first restaurant — a 5,000 square foot, 180-seat venue in Hong Kong — ready for opening in the second quarter of next year.
He said the menu would offer a full-course meal with antipasti, main dish, dessert, plus a glass of Italian wine, for an average of 300 Hong Kong dollars (38.5 US) per head.
“At Jamie’s restaurants, you will often find a blue-collar worker, a student, and the chairman of a blue-chip company side by side having a meal,” he said, while stressing that everything they served would be “natural and organic.”
Hong Kong will also be established as the development hub, providing all regional support in licensing, real estate, training and logistics for the project.
Meanwhile, Pinshow said Oliver also had his eyes set on Europe for his chain’s international expansion.
Oliver, 34, shot to fame in 1999 with his cooking series “The Naked Chef”. He has since featured in numerous television series, and sold millions of copies of his cookbooks worldwide.
His 2005 television documentary “Jamie’s School Dinners” sparked a national debate on nutritional issues, and is credited with persuading some people to change their eating habits.
Source