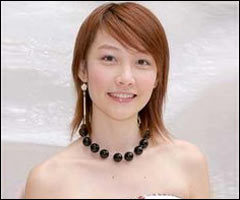 HONG KONG : Former actress Bobo Chan has put the Edison Chen sex photo scandal behind her and reportedly got engaged to boyfriend Philip Jin in a low-key ceremony.
According to the latest issue of 3 Weekly magazine, the ceremony was attended by family members, relatives and friends, and the couple were a picture of happiness and were often seen intimately together, prompting guests to urge the couple into tying the knot soon.
Previously, a reporter had asked Jin’s mother what she thought of Chan marrying her son, and she smiled and gave the thumbs up.
According to the 3 Weekly report, although the couple are not officially married yet, Jin’s family is willing to overlook her past and accept her. Chan has also put the past behind her and is looking forward to the wedding.
Chan’s engagement to Jin was reportedly called off when the sex photo scandal broke in January last year. The 30-year-old fled to the United States for 10 months and recently opened a gem shop in Hong Kong.
Source