If you can read in Mandarin, read it here 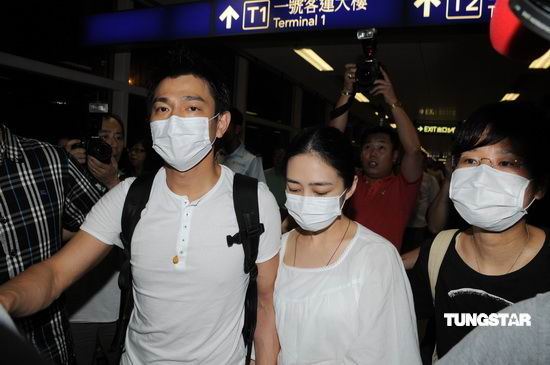 More photos of andy in Tungstar
BEIJING : Hong Kong pop star Andy Lau and long-time girlfriend Carol Chu made a public appearance together for the first time on Tuesday after years of dodging rumours.
Lau and Chu had returned to Hong Kong after attending the funeral of Chu’s late father who passed away last Tuesday in Malaysia.
At approximately 10.35pm on Tuesday night, the couple were seen and photographed by the Hong Kong media upon arrival in Hong Kong, Sina.com reported.
The couple, still in mourning and dressed in white, had face masks on.
Their appearance together marks the end of much public speculation about the couple who have been linked together for the past 24 years, but kept their relationship a secret until now.
Lau had kept a low profile throughout the funeral and came under fire for “hiding”. He was also criticised by many for indirectly denying his relationship with Chu.
Aware that Lau was due to return to Hong Kong, hordes of media waited at the airport anticipating his arrival. As soon as the Heavenly King made his appearance, reporters made a beeline for him, with several tumbling amid the chaos.
Protecting Chu from the media frenzy, Lau kept her close by his side as they made their way through the airport, hand-in-hand. It appeared that Chu had gained some weight and was seen protecting her belly, indicating a possible pregnancy.
When the media asked Chu how she felt, she remained silent and Lau responded on her behalf, saying, “There is nothing to say, many thanks to everyone who has shown their concern. You are free to think what you will, I do not plan to explain too much. Right now, I would like to bring her home to rest, and speak to all in future.”
On Monday, the star also did not hide from the photographers when he was spotted at the cemetary near Kuala Lumpur. Lau and Chu’s relatives were gathered at the tomb to pay respects to Chu’s late father on the seventh day of his death.
Andy Lau with Carol zhu Pic
Andy Lau at the funeral1
Andy Lau at the funeral 2
More photo of andy’s lau
Source
Latest Update: Andy lau ex gf Yu Ke Hsin